EphemRadio podcast episode #57: I talk about halloween and go on various tangents such as consumerism and trying to stay true to who you are and manifesting your personal philosophy into the real world even when circumstances make it difficult. Then I go over some international news & weather of three cities in Africa, then finish up talking about white people and three specific aggravating experiences with them and more tangents such as the ratios of good vs bad people among various races and cultures.

In this weekend edition of the EphemRadio podcast #56 I talk about how we cannot rid ourselves of fear, anxiety and anger but can learn how to manage them by turning their energy into something constructive. Something I’ve talked about in the past, but every so often I like to revisit these subjects as I gain new understanding and perspective. Then I go into the international news with a few things from Santander Spain, Cranbrook Canada and Warsaw Poland, with the latter being more like a visitor’s guide. I also talk about some upcoming independent films, my visit to the anarchist book store Wooden Shoe Books in Philadelphia, looking forward to the upcoming second season of Stranger Things on Netflix, burial customs and where our poop goes. 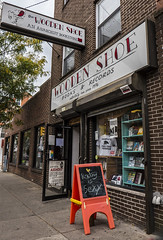 I start the podcast by getting back to movies opening in major theaters and then go over the weather and local news of a few foreign cities such as Kyoto, Japan and Guayaquil, Ecuador.

I then share my thoughts about public executions, medieval torture, the Pennsylvania Renaissance Faire, being parents that support cosleeping, the PBS Nature series TV show and The Walking Dead Season 8 Episode 1.

Saturday, October 21st I created the first weekend episode of the podcast which may become a routine since I seem to be gathering momentum in regards to having plenty to talk about.

In this episode #54 I talk about: my trip to Ricketts Glen State Park in Pennsylvania, including its history and related topics such as the importance of nature, The Walking Dead video game and upcoming season 8 of the TV show, being lawful good to solicitors and NPC’s, quick thoughts about Bladerunner 2049 and other tangents that I can’t remember at the moment.